Well, all I need to do is post this picture and they say a picture says a thousand words. This is the goddamn life. I can’t think of a word that expresses the tranquillity of this place. 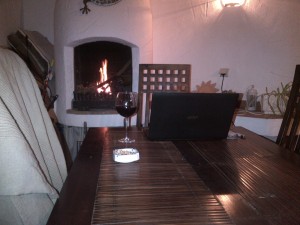 I don’t think I could have picked a more perfect location if I searched the ends of the earth. I have absolutely fallen in love with this area and already feels like home.

Don’t get me wrong it’s not always a bed of roses like people think. “Ah MBN sat in Spain in the sun and sipping Sangria”. It’s most definitely not a holiday, it’s pretty much work as usual.

The weather has been pretty horrendous, massive winds up to 80km which kept blowing my playing cards all around the garden. I keep finding jokers under the shrubs to this day. Also pretty heavy rain, the pool nearly flooded and the plastic duck nearly got away.

To get anything done here you need an NIE/NIF number, seriously to do anything!!! Couldn’t even top up my phone credit online without it. To get this it’s a bit of a ballache, so anyone coming over I would advise to get this done before you come. There are plenty of people that will do it online for a small fee. Otherwise you need about 3 trips to Benidorm if you need to get it quick, and when I say quickly, I mean Spanish quick which is a week. Mañana MY ASS!!!

Doesn’t sound too bad, but when Spain is only alive about 2 hours a day and they seem to have a bank holiday one day a week, it can get goddamn frustrating.

So I needed this NIE number to get a car, and to get the NIE number I needed a car. Oh that’s a sticky situation. It meant I had to hire cars at €160 a week.

Finally got it all sorted and bought a little run around, it’s quite an old car but low mileage. If it lasts 6 months I’m happy. I’ve named it Tulisa (I watch too much XFactor!!!)

I have also learned a few dodgy car dealers (or flaglettes as apparently the Germans call them) round here, so please msg me if you’re looking to buy a car in this area.

Hopefully will be able to afford a cool car next year if have some nice poker wins. I thought best to start cheap until I get used to driving on the wrong side. I’m bound to have a bump or two.

Flew back to the UK to play the Genting Poker Series in Sheffield, I was really looking forward to this weekend. Had a mishap where the airport bus didn’t show up and cost me €127 in taxi fare. This is still in dispute and won’t be lying down without a fight.

The weekend was a good one, pretty unusually quiet for a poker weekend. No mad benders for a change. Even Darren Craven was drinking tea!!!!

Had some nice meals in the restaurant with Paul Jackson and the gang, had 3 steaks (not all in one sitting), he does look after me bless him. Had to share one of the steaks with Zimbler as it was so big. In fact it was probably bigger than both of us put together.

Poker was the usual. The main was standard, happy with my play. But was chipped up in the side event and blew it in absolute epic fashion. So mad at myself!!!

I knew my head wasn’t in it; this has been an exhausting rollercoaster. I’ve since come back and got my head into gear.

I was glad to get out of there to be honest; I’m starting to really see from a clear window view all the negative dark colours.

I felt such joy to land back and see the big Costa Blanca rock.

Charlie is away in Prague all this month dealing at the GSOP and WPT. It feels weird being here without her. I think we definitely a good mix of people, we both very similar in a lot of ways (apart from she is crazy) both intelligent logical people, and throw in the fact we have some severe differences in political viewpoint, it leads to some great debates. I think we are very equally matched, and about 1000 games of Gin have proved that.

She also an amazing cook, been eating really good here. I think we have an arrangement that she cooks and I clean up after.

I’m planning on heading back to Blackpool for Xmas and also a few days in Notts maybe. No way can I stay here a whole month and then through Xmas on my own. I would actually lose my marbles.

Although my social life is picking up already, I have 2 friends called George, one English and one German. Out for lunch Saturday with my Cousin and I’m off for drinks tomorrow with my neighbour’s daughter Lelia, she looks like a cool girl and she speaks Spanish, English and German. That’s seems to be bloody standard here.

I had an awkward situation closed in this old French woman’s house trying to ask her about a car for sale, we both didn’t speak much Spanish so was trying to point at things in my phrase book. FML!!!

So from now to Xmas, I’m going to get my head down, learning my Spanish, playing my poker, doing my work and just relax.

I hope the sun comes out a bit before now and Xmas so I can come back to the UK with a bit of colour. Bored of the white jokes already.

Peace out people, I hope you come to Spain soon 😀

One thought on “The calm after the storm”